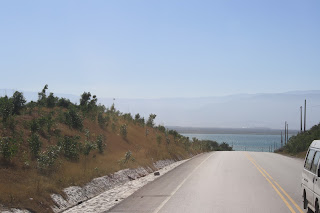 We have been in Haiti for about 4 months now.  The first three months we unbelievably challenging.  But, it seems as if in this last month we have found our groove.  Today, I was reflecting on some of the things we've learned so far:
- With enough of an arch in your back, you can wash your hair while keeping most of your body out of the stinging cold water.
- Children are excellent teachers of language.
- Challenges become much easier when you stop struggling against them and instead try moving with them.
- If it looks like stewed brain, it probably is stewed brain.
- You can eat just about anything if you think its chicken.
- Assuming is much different than knowing.
- It is sometimes the things that you don't remember saying or doing that have the biggest impact on another person.
- I am stronger than I thought I was.
- My children are stronger than I thought they were.
- My husband is every bit as strong as I have always believed him to be.
- A reasonably effective bath can be had with a bucket and about 20 oz of water.
- Never, ever discount the simple joy of ice cream.
- Kids are kids.  They all want comfort in their pain, and really enjoy when adults act silly with them.
- A single person cannot represent and entire culture.
- Communication is vital to mission, but can be as simple as a smile.
- A pleasant greeting is the best bridge over the language barrier.
- A spider is only as creepy as you let it be.
- God never fails to provide exactly what you need.  Sometimes I need to be shaken up.
- Make a plan.  Expect it to change several times.
- Patience can be increased by frequent use.
- Life lived outside brings all sorts of adventure.
- It is hard to hold onto negative feelings when you are clapping a crazy beat and singing "This is the day the Lord has made" with 50 kids.
- There is so much I still have, and want, to learn.

It’s been two years, and I still think about him. He was crushed, abandoned, and given up for dead on the lawn of an overwhelmed hospital in Port au Prince. When I saw him I had to take my emotion and place it in a box deep inside my center or I would have crumbled on the spot. He was naked, broken, barley conscious on a foil emergency blanket. I ran to mix him rehydration salts and fed him through a baby bottle. He couldn’t speak and his only identification was a number written in black marker on his bicep, 1013.


He was dying, 8 days had passed since the earthquake and everything in him was broken, legs, feet, hips, ribs, everything and he was alone. Dr. Bill gave him an I.V. and drugs for the pain. Then it was time to move him, 30 minutes East to Malpasse where doctors had taken over an orphanage and set up a temporary hospital. Bill held the I.V. bag and told me to pick the child up. I can only imagine the look on my face, “Won’t I hurt him?” I asked. “Yes.” He said. And that was that. Bill was the doctor, the best doctor I have ever known and I did what he told me to. I took the boy into my arms.

He was so light. He must have been 8 or nine, though he could have been older, children are so much smaller in Haiti. He groaned. I walked as lightly as I could to the car. I was in the passenger seat and Bill was behind me, the driver was a man I had never seen before and he brought a friend along for company I suppose. The five of us rode together down the rough rode toward the makeshift hospital in the Haitian countryside.

I held the child, still in his tin foil blanket, and whispered to him as he drifted in and out. It was all so wrong to me. I was angry. It should have been his mother’s face he saw, it should have been his father holding him, but he had me and my hairy, pale face looking down at him. It wasn’t right.

I was terrified he was going to die in my arms. Three times I thought he had died and then we would hit a bump and his bones would grind and his eyes would open to bulging and he would gasp from the pain. There were so many bumps and cruel pot holes, soon I was praying for God to take him. The road went on and on and then I was begging God to have mercy and end this suffering. I started to recite Psalm 23, The Lord is my shepherd….and as I stumbled through the words the car cleared the last concrete houses and I could see the clear, January fields and the mountains before us and on either side, and time stretched out and I felt how alive I was, really alive. I looked around and we were in the valley of death and dying, and I looked down at this boy and God showed up and He didn’t do as I pleaded but he showed me the child with His eyes and I saw my child and I sang to him.

We made it to the field hospital and I carried the child and began calling for help and from shoulder I heard Bill say “It’s ok Chris. It’s ok” and of course it wasn’t ok but it wasn’t an emergency, there was nothing anyone could do. I gave the boy to a medical student or a nurse and I just sort of lingered. I didn’t really understand what was going on and I don’t remember it clearly now but then Bill was leading me back to the car.

Two years later I traveled down the same road and through the same valley and there was singing again but this time it was the singing of 13 Haitian men and women on their way to the river to be baptized. I thought about the boy. I think about him all the time but now I replayed the memories through the drive and it all felt real again. And in that moment God showed up again and He did what He always does for me, He healed the broken bits inside of me.

C.S. Lewis once wrote “That is what mortals misunderstand. They say of temporal suffering, ‘No future bliss can make up for it’ not knowing that Heaven, once attained, will work backwards and turn even that agony into a glory.” I hold onto that and I pray for the child I think of as 1013. I pray that Jesus will wipe away every tear and heal all his brokenness and turn every bit of pain into a glory. I look forward to the day when I meet him whole and healthy as a brother in the presence of our King and he’ll tell me his real name and I’ll tell him mine. I thank God for placing me with him for that short time and allowing me to be his father. 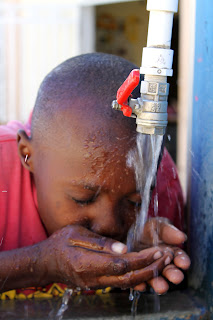 It may be hard to comprehend, but clean water is a scarce resource in Dargout. Very few homes have running water. Wells are expensive and unless they are deep enough are often contaminated. The majority of the people must purchase the water they drink and wash with from water trucks (think ice cream truck that sells water) or local entreprenuers.
We are blessed to have clean water at One Family in Christ Foundation. Pastor Kesnel has a deep well and a reverse osmosis water purification system. The Foundation sells water to people in the community at a reduced rate (2 gourdes or about $.05 per 5 gallons). Unfortunately, the system requires power to pump the water from the ground and through the purification system. On the days that we get electricity from State Power this is no problem as a night of eletricity fills the tanks for the day; however, there are many days when State Power does not come. For the first seven days of January there was no power in Dargout. When this happens, the generator must run for at least six hours to fill the tanks, as gasoline is over $6 a gallon here filling the water tanks with the generator is very expensive and the Foundation must either charge more for the water or run at a loss.
This dilema was resolved this weekend when the people from Water Missions International (the organization that donated and maintains our purification system) installed solar panels on the roof of our school and a new more efficient pump for the well. The panels power the pump and fill the tanks in a third of the time that the old pump did. This is a huge blessing for the orphanage, school, church, and the community. Due to the reduced cost, Pastor Kesnel is giving away water for free all week and then lowering the price of water to 1 gourdes for 5 gallons for everyone in the community. An incredible blessing in a country where millions live without access to clean water.
Merci Senyor! (Thank you Lord).

We are happily back in Haiti!

We enjoyed 3 wonderful weeks of rest and rejuvenation in Florida.  We are so very, very grateful to our parents for making that trip possible.  It was a blessing beyond measure to our family, our marriage, and our souls.  We thoroughly enjoyed hot water, constant electricity and a variety of foods.  It had surprised me how much I truly enjoy variety- it is something I hope I never take for granted again.

We also enjoyed visits with family and friends- both in person and through Skype.  It was a joy to see beloved faces and have real-time conversations!

Our return to Haiti was smooth, and we were warmly welcomed back by the friendly faces of One Family.  We were even celebrated with a beautiful cake and ice cream- the kids were so pleased!

Our rooms are still not ready, but they are very, very close.  It's exciting to be here for the last few pieces to come together.  This time, they really do only need fixtures.  The windows and screens were installed yesterday, and tomorrow we expect the last few shower tiles and nozzles to go in.  We should be able to start moving in this weekend!

The weather is beautiful.  Warm and breezy days, with cool nights.  It is they dry season, which means far fewer mosquitoes.  Even the roosters seemed to be calmer- they didn't start crowing until almost 3:30 this morning!