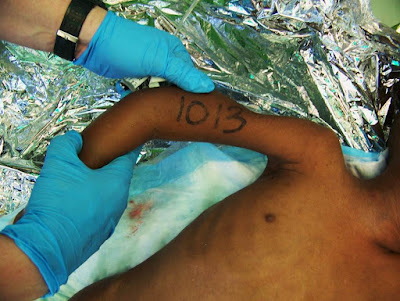 In the days following the January, 2010 earthquake in Haiti, Chris and I both felt called to serve in Haiti.  We have spent months in prayer and study to determine what that serving might look like.

In just 2 short weeks, we will launch our mission in Haiti, which we've named 1013 Missions.  1013 was the only identification given to a little boy who had been crushed and broken in the earthquake.  His body was beyond repair, and he had been left to die outside, alone.   In this time, Chris was serving with a group of amazing people- doctors, businessmen, employees and volunteers with The Global Orphan Project- all pulled to Haiti by the cries of her suffering people; all doing everything they could to help.  When they found 1013, all knew he could not survive.  Not in the ravaged state of Haiti, probably not in the best hospital in the States.  But, neither could they leave him to die alone outside.  Instead, they scooped up and drove him over destroyed roads to a place where he might at least receive relief from his pain before passing away.  During that drive, Chris cradled the boy in his arms, prayed for him, and sang to him.  He gave thanks for his life, and prayed for God to end his suffering.   Chris stood in for the boy's father, loved him, and mourned him.

We have named our mission in this boy's honor- with the only name we have for him.  It is our reminder that the things of this world are not as they should be.

Our goal is simple, but huge: to bring the hope and life giving truth of the gospel to Haiti.  We envision a church that is a vibrant center in its community- led by Haitian pastors and on mission to serve Jesus.  We see a church in partnership with an American church- not a one-directional financial relationship, but a true exchange of fellowship, prayer, and support.

In just 2 weeks we begin.   For several months, we will be actively learning about Haiti:  language, culture, and church.  We will settle ourselves, and our children into "home away from home."  We will be working in close partnership with an established church and Pastor- learning more about church in Haiti.  With him, we will identify potential leaders and begin growing a group of people that will become the family of our church.

And, we will be working to create a guest house- a place where we can invite a group of 10 or so to come experience mission in Haiti.  We're hoping to be able to host the first group in late spring of 2012.  Want to visit us?

Our time has come!  We've begun the countdown- 24 days until we leave- according to Ella's daily announcement.

Twenty months ago, God called us to Haiti. Then, He took us on a year long detour through Lemont.  At first, it seemed like an unwanted, but necessary diversion.  God wanted to show us something.  But, in the same way that a drive on a long country road is good for the soul, our time in Lemont has brightened us.  We have been blessed to be a part of something wonderful.  We've been able to help bring church to a community that needed and wanted it.  We've been able to act as advocates for Haiti, and even inspired others to travel on mission.  We have formed friendships that we treasure.  We are more focused, more determined, and more dedicated to our mission.

And now here we are; on the verge of our heart's desire.  We are filled with joy and trepidation.  We are sad for the goodbyes that must be said.  We have moments of doubt, and fear.

We see the mountains ahead, and they are beautiful.