A HUGE thank you to everyone who has joined our support team!  We are grateful for the prayers; and the financial donations & pledges have brought us about half way to our goal!   If you'd like to join our team, financially, prayerfully, or as a volunteer (in the US or Haiti!) please print our contribution letter and send it in!

"All this is for your benefit, so that the grace that is reaching more and more people may cause thanksgiving to overflow to the glory of God."  2Corinthians4:15

Haiti Through Our Eyes

The Girl Who Wasn't There

I sat on the floor of a steamy nursery in an orphanage in Northern Haiti, watching a “mama” (mama is the Haitian term for orphanage worker) feed beans and rice to an emaciated baby. The baby, Sarah, weighed in at 5 lbs. I learned this from our doctor, Bill Gossman who had just examined her, because in addition to being severely malnourished she was also sick (probably a cold one of us blancs gave her).

Sarah was thin and ghostly. Her skin hung loosely from her arms and legs. She was quiet and still, except her mouth. Her mouth worked feverishly on the beans and rice. I stared, the only sound Sarah’s gums smacking as she ate. Babies should not look like that. This was the overriding thought running through my mind. Babies should be chubby and full of color and not look like they were found under the robes of the ghost of Christmas Present-“The girl’s name is want, the boys’ ignorance. Beware them both but especially the boy because on his brow I see doom”. Sarah could have been written by Charles Dickens.
Her name was not really even Sarah. When someone asked about the baby’s name the mama had said “M pa konn ki sa li te fe ” and the only bit the person could make out was “sa li” and that became Sarah. “Sarah” had been brought to the orphanage by her father a few days before. His wife had died and he was unable to care for Sarah…clearly. I don’t know how long her mother had been dead, how long Sarah had been wasting away, but she wouldn’t have lasted much longer. There just wasn’t anything to her. I have often misused the word ‘Horrible’, and in that moment I regretted every instance, because this was horrible. This had nothing to do with the earthquake, Port-au-Prince was a 10 hour bus ride south through the mountains, this is Haiti. This stuff just happens here. If I were to ask any Haitian about this, 9 out of 10 would say without batting an eyelash, “This just happens here.” In the shadow of what is arguably the richest country…ever, there is one half of one island where little baby girls starve to death. “Sarah” barely existed. When my friend Dr. Bill came to check her out and asked to see her medication chart, there wasn’t one. Sarah wasn’t on the list of children in the nursery. The Americans who ran the nursery didn’t know anything about her and had forgotten that she was there. The mamas knew her age and how she got there but that was it. “M pa konn ki sa li te” means “I don’t know who she be”. 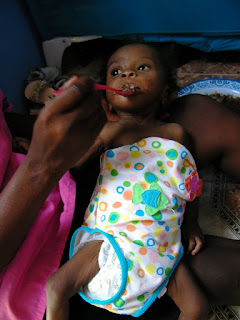 It was horrible, the whole thing, but here she was and she was eating. Three members of our team really took her and by the time our week was up “Sarah” went from 5 to 8 pounds. And due to their devotion and Dr. Bill’s very loud criticism, Sarah would go to a hospital that specializes in treating starving children. But in that moment it was just Sarah, the mama, and me. It was hot, horrible, and beautiful this baby eating rice and beans. I don’t know how long I sat there, but it was long enough for the more practical part of my mind to ask the question Why the hell is she feeding her rice and beans? I mean, 1) That’s just a risky thing to feed any diaper wearing child, but 2) and more to the point, I have two children and they didn’t start any solid foods until they were 6 months old. How was this little one able to eat this? So I asked the mama “Se li ki laj?” how old is she? And she held up nine fingers and said “nef” nine. That didn’t seem right so I asked “semen?” weeks? The mama shook her head and said “mwa… nef mwa” months…nine months.

My heart is heavy today. It's been one year since the earth shook apart the lives of millions of Haitians. Lives lost, forever changed by injury, exposed to homelessness, hunger, desperation, illness. Nearly a million people still live in tents.

My thoughts dwell on a little boy that I love who lost his parents in the quake. Just a few months later, when I met him, he asked if we could be his family. I ache for a baby girl whose teen-aged mom GAVE her to me, and couldn't understand why I wouldn't (couldn't) bring her home to America. I weep for a man, a strong, peace-filled, God-loving man, who continued rescuing children while mourning his own son. I pray for a woman who delivered her baby into a loveless room.

For reasons I don't fully understand, these people have become part of my family. I love this country. I love her people, and their culture. I hurt for their loss and hope for their future. I long to be there in a way that I can only describe as longing for home.